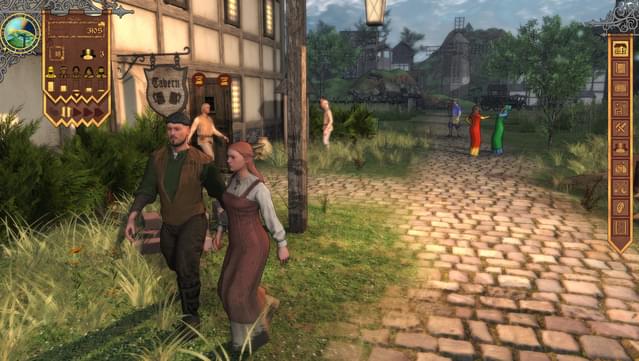 Helpful information to those who are brave enough to unlock achievments by playing the campaign!

I transfered the information from my post in the forum here.

Hope this is helpful for all who are patient enough to attempt unlocking all Achievements. If need be, i will try to update this.

I unlocked all the achievements after I played the campaign twice. Since there are quite some bugs within the campaign, especially at the end, there might be some quests that remain unsolved, but i consider the story part to be over for now – until some later content might add something.

I will not give a complete game-guide, but I hope I can share some information to those who, like me are/were trying to solve all achievements.

I´ll start from the end because the achievemnts are harder to get and the global statistics show that very few players get them:

“Did not live up to the name” – this you will get if you eliminate all factions during act 3 while trying to appease chancellor trovin – just always do what the baron says and follow his advice till you end act 3 and reach martyns funeral – there will be no factions left so the only person you can speak to is the baroness – she will lead you to the decision to stay an innkepper – after the last dialog the baron is killed and when you turn back to your inn the game will display “failure” and the achievment will unlock.
READ:  Crossroads Inn: All Recipes Lists

“All’s well that ends well” – Same as above, but you should always do what martin says during act 3 so that there are 5 factions+the baroness attending the funeral – If you choose the baroness you stay an innkeeper but will unlock the achievment. If you choose one of the factions you get 4 new tasks that are very bugged and hard/impossible to solve – this might lead you further but it will have no influence on the achievments.

“The End” – Finish Act 3 – sounds straight forward but is actually really hard if you try it unprepared. Before you even encounter trovin you should make shure you can handle his bans and taxes. So before you hire a vendeta at the beginning prepare the following: collect 100 guilded water in your storage; remove all upper floors and build what you need on the ground, make sure you have enough money to pay some taxes. During act 3 there will be an tax on income so make shure to get rid of your money in the right moment by buying furniture that you can resell once the ban is lifted; during the fire-ban you should sell all torches and candles – you can reinstall them later. make sure to solve martyns/baron quests as fast as possible if you cant avoid a certain tax.

“Oh, well” – Refuse to pay your debt to Trovin – Have at least some tax to pay in act 3(very easy task). Use the dialouge to refuse the payment. Since trovin will bother you regularly you can try every dialouge option. Once you have forced him to let you go he will just come back a few minutes later but you can´t use any dialouge twice for the same tax so your options will get fewer with every visit of him. In the end you have to pay or it will be game over but the process of delaying the payment will unlock the achievment!

“Revenge” – Finish Act 2 – should be no big problem, but be aware that you can either finish act 2 with the seers or the guildbones – wich relate to other achievments. Some people may have difficulties in getting the adventurer quests right – make sure you unlock information with gossip and send the adventurer to the right spots within the places(highest success chance)

“Golden future” – Join forces with the Gildebones – just finish act 2 without the help of the seers. Be aware that it still may be necessary to speak to the seer in order to progress the story – the dialogue and appearance of people may be interconnected – use savegames before you decide critical storyelements or before you start/finish critical tasks. Be aware that you sometimes do not get the proper indicators on people – sometimes you have to check characters manually if they still have to say something.

“I see a bright future for you!”-Join forces with the Seers – same as the guildbones but from the seer perspective. You have to play act 2 twice if you want to get both achievments (use savegames)

“That thing about the countess” – Finish Act 1- be aware that things like the nude-painting might not show in the right furniture-tab when you got them – use the unsorted “all” overview to check if you have the painting, same goes for installation of the bard stage, martyn grave and martyn painting later in the game. Make sure to unlock all misssion information with gossip; choose the right place to steal the painting. Look out for unfinisshed dialouge or task when you don´t get progress.

“Something ends, something begins” – Finish prologue – just follow the instructions as good as possible . Look out for game mechanics you havn´t discoverd or understood yet.

“We’re all friends here, right?” – Convince Rockburry not to send his men on you – use the dialouge options as best you can.

I’m hope this was useful. It is a lot about patience and making the right decisions. Some situations progress very fast so that you can overlook valuable information and in some situations it seems you wait endless for certain tasks/events to trigger. If there was no working savegame system this would be near impossible at the moment. I spend around 60 hours in game to figure all this out.
Written by warbeetle