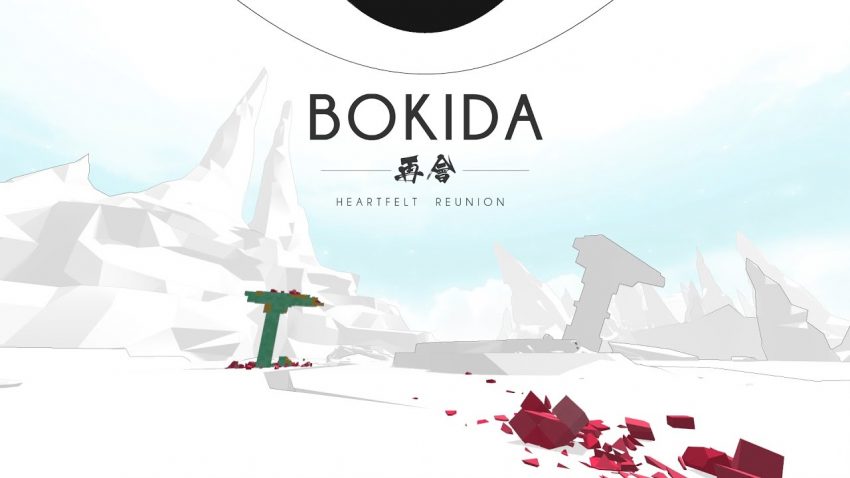 Being in the air

After activating the first monolith, a video tutorial will appear on how to put blocks and get attracted to them. To stay longer in the air you need to jump and hold the space

The Low is the Foundation of the High
Reach maximum velocityPut the block in the distance, jump and pull several times in a row to the block

At the beginning of the game, we are taught how to build, cut, push and clean blocks (buttons 1, 2, 3, 4). One block can be cut into many small fragments, which are also taken into account in achievements.

Perseverance
Cut through 1000 blocks or more in a single CUTCutting width about 9 blocks. That is, you need to build a rectangle of 9*112 blocks and cut it along. Better to take with a margin. I built a tower and cut from top to bottom

The Dust of the Earth
Push 1000 debris and fragments with a single PUSHAfter the previous achievement, continue to cut the tower into many small pieces. When there will be a sufficient number of pieces you need to use a push on them. Pieces physics can put a heavy load on a computer

Hollow to be Full
Clear 3000 debris and fragments with a single CLEANAfter the previous achievement, use the cleanup. The longer you hold the ability, the more space will be cleared. If the pieces are scattered or if they are not enough, you need to cut them further

Next come the cumulative achievements. You can build, cut, push and clean any number of blocks at a time, the main thing is to use the same save slot

Complete Attunement
Gather all echoes of the Dark planetYou need to collect 67 black dots. The game has a room with a map where points that are not collected are marked 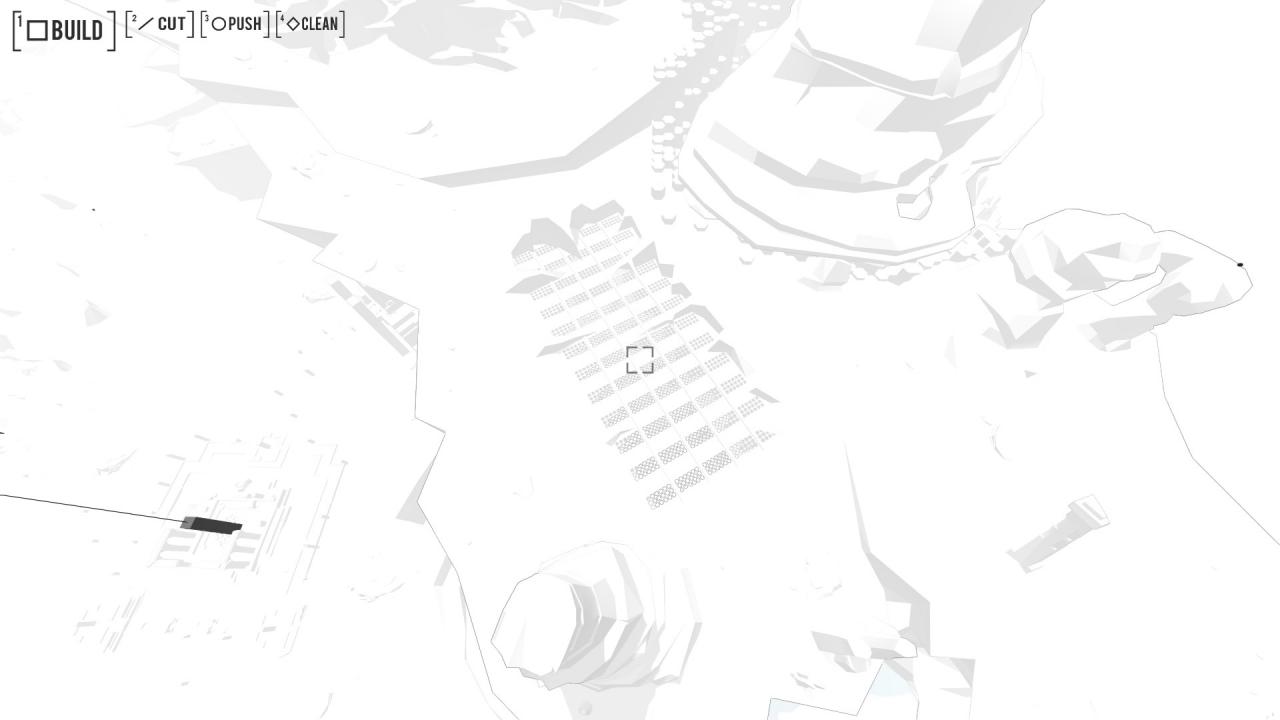 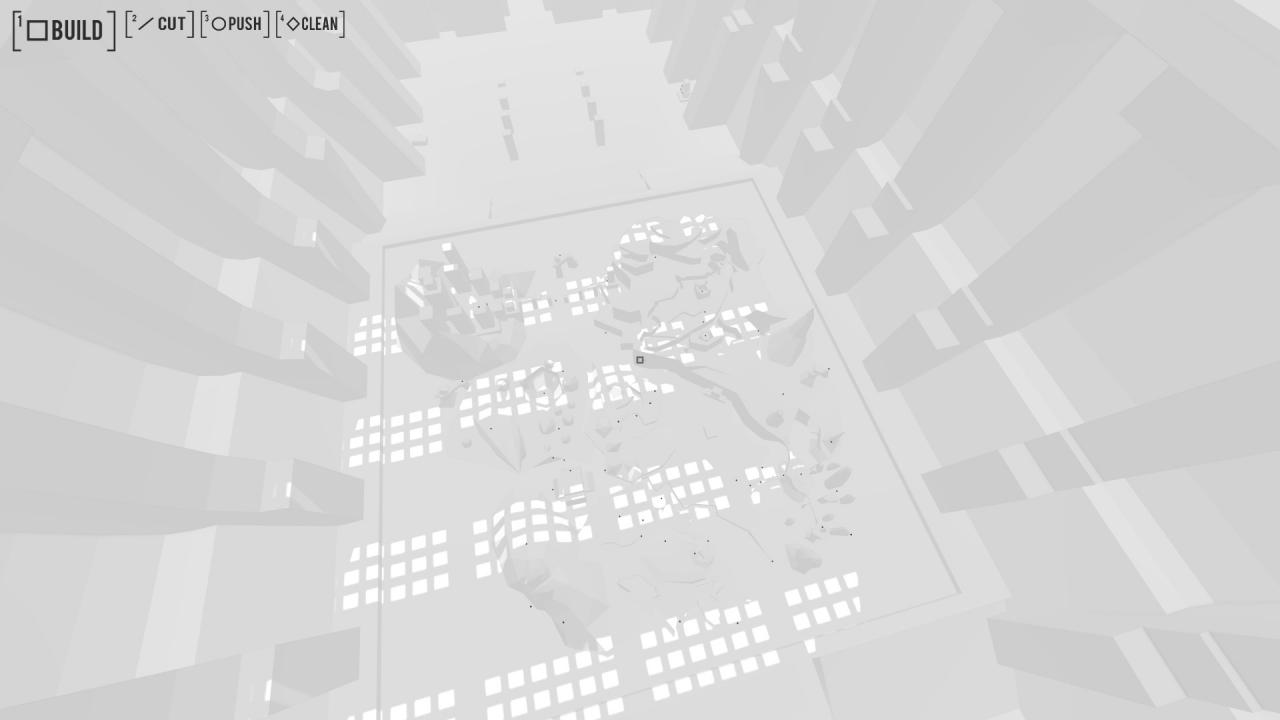 To open the first three abilities, you need to find one of the two portals, fill the recess with blocks, then cut and break the blocks. After completing the puzzle inside you will gain the ability and exit through the second portal 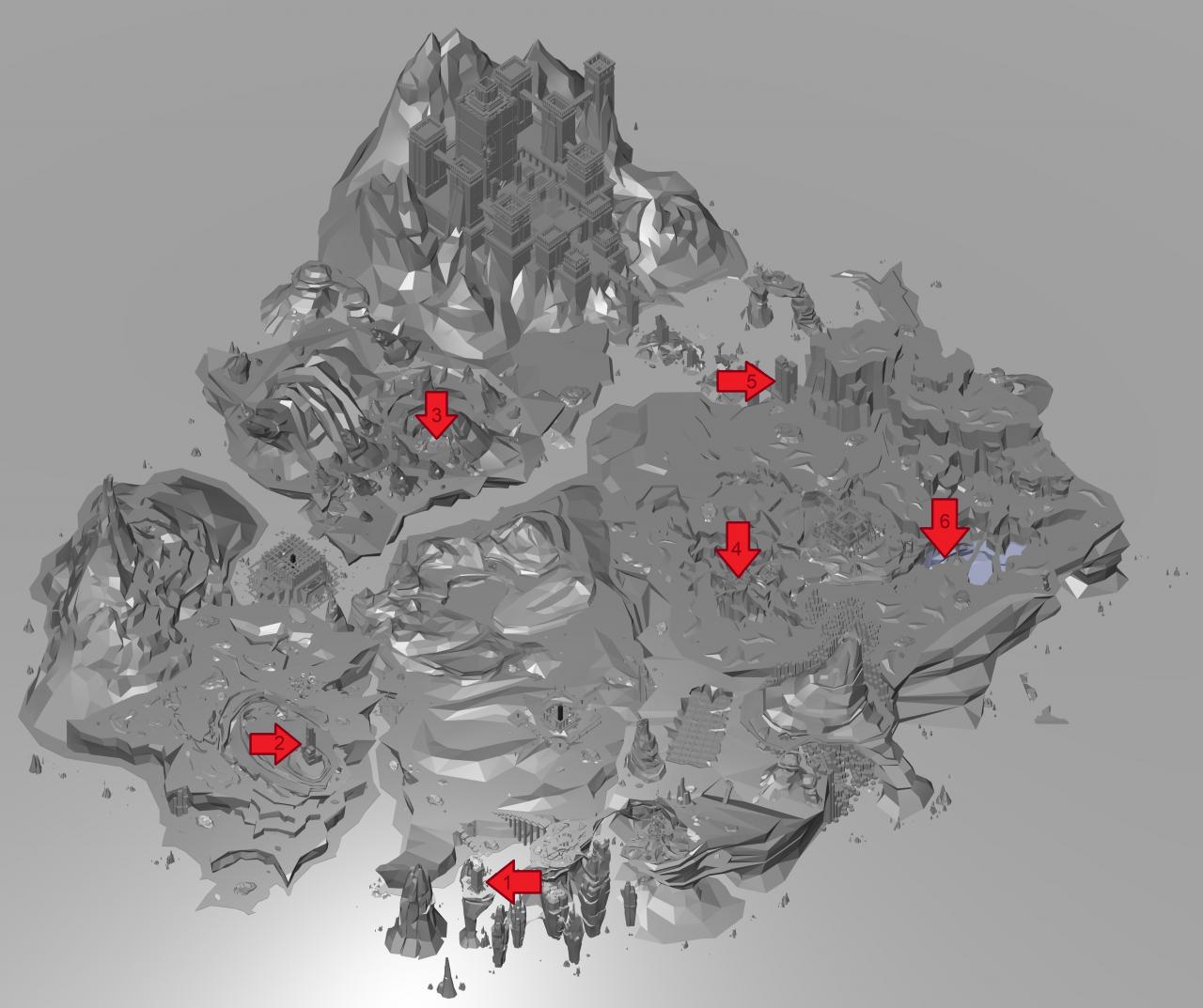 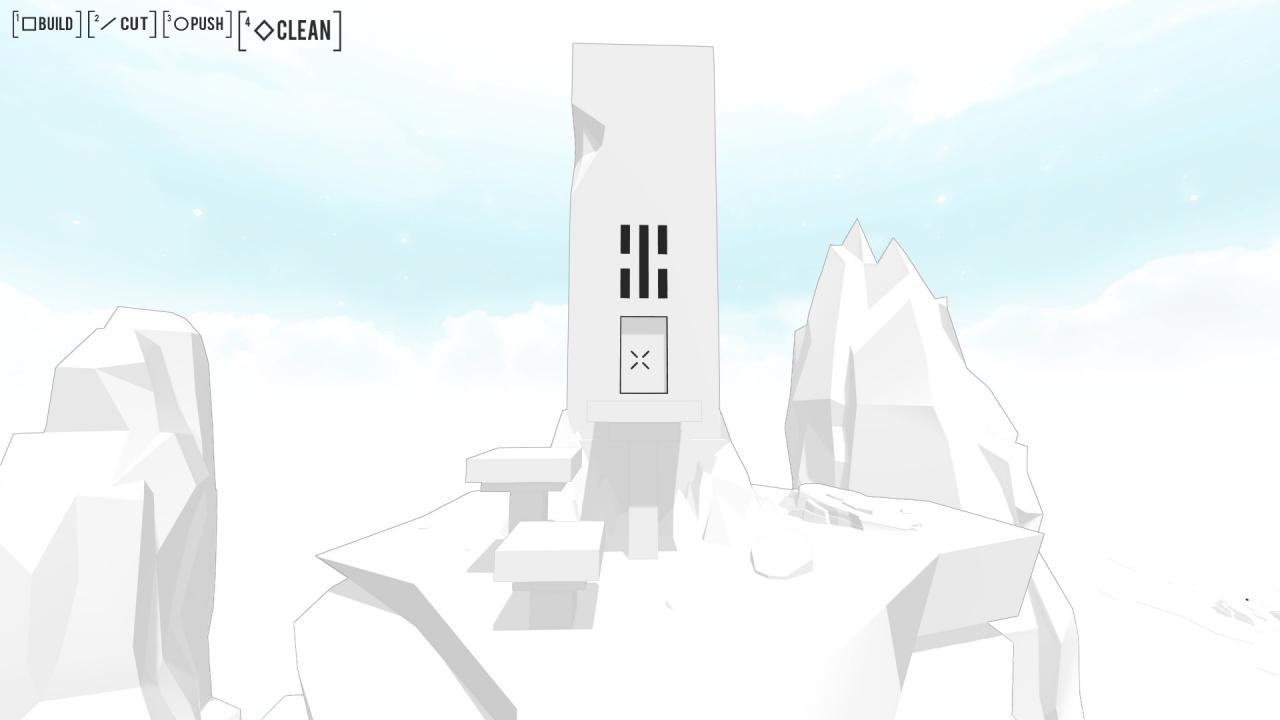 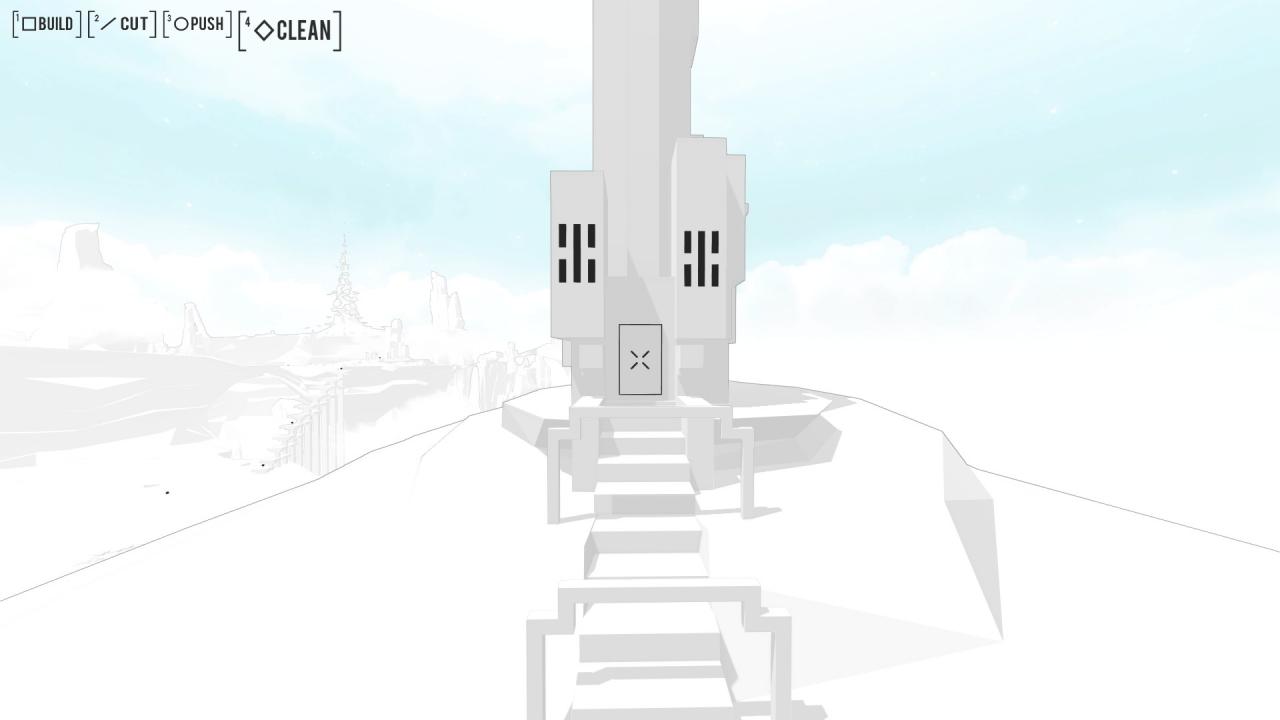 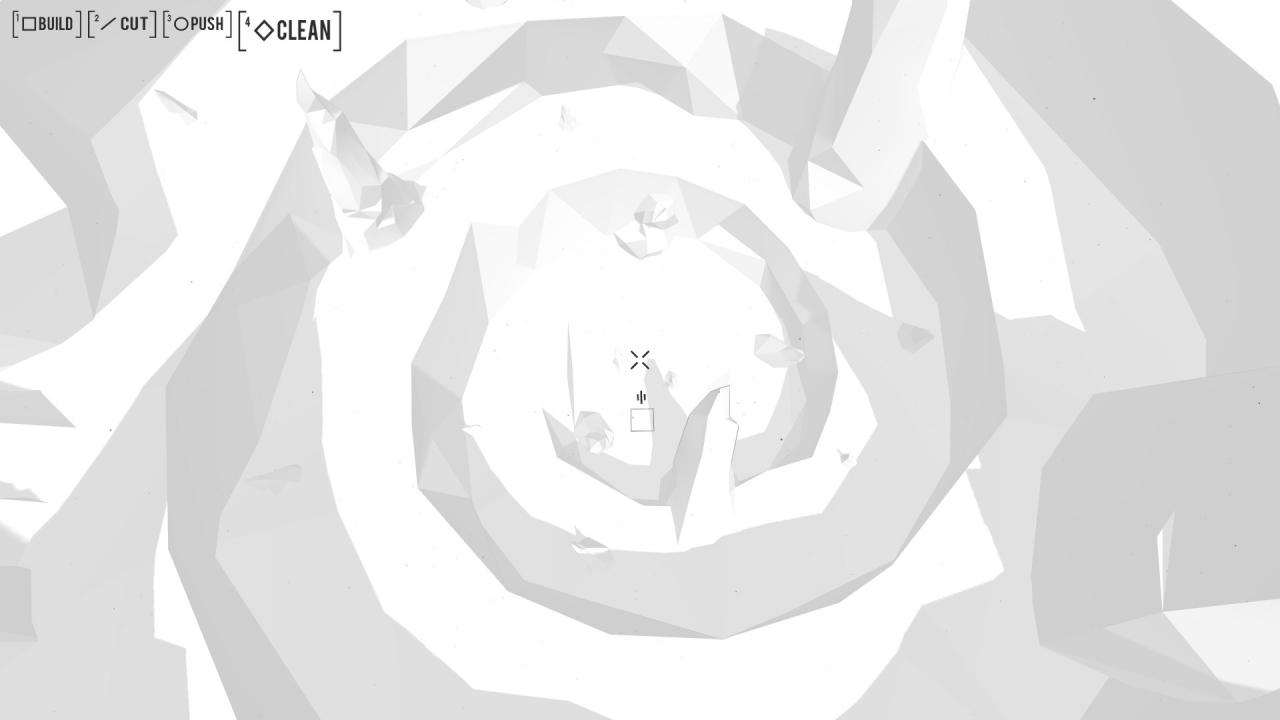 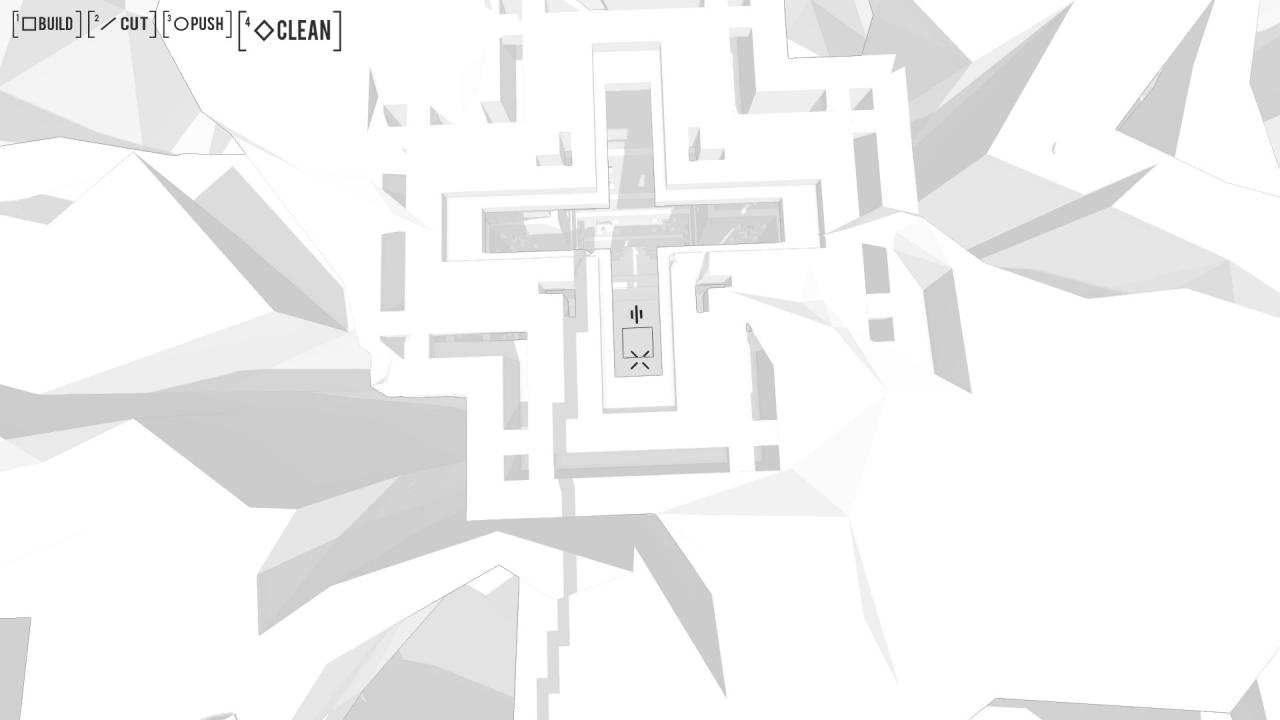 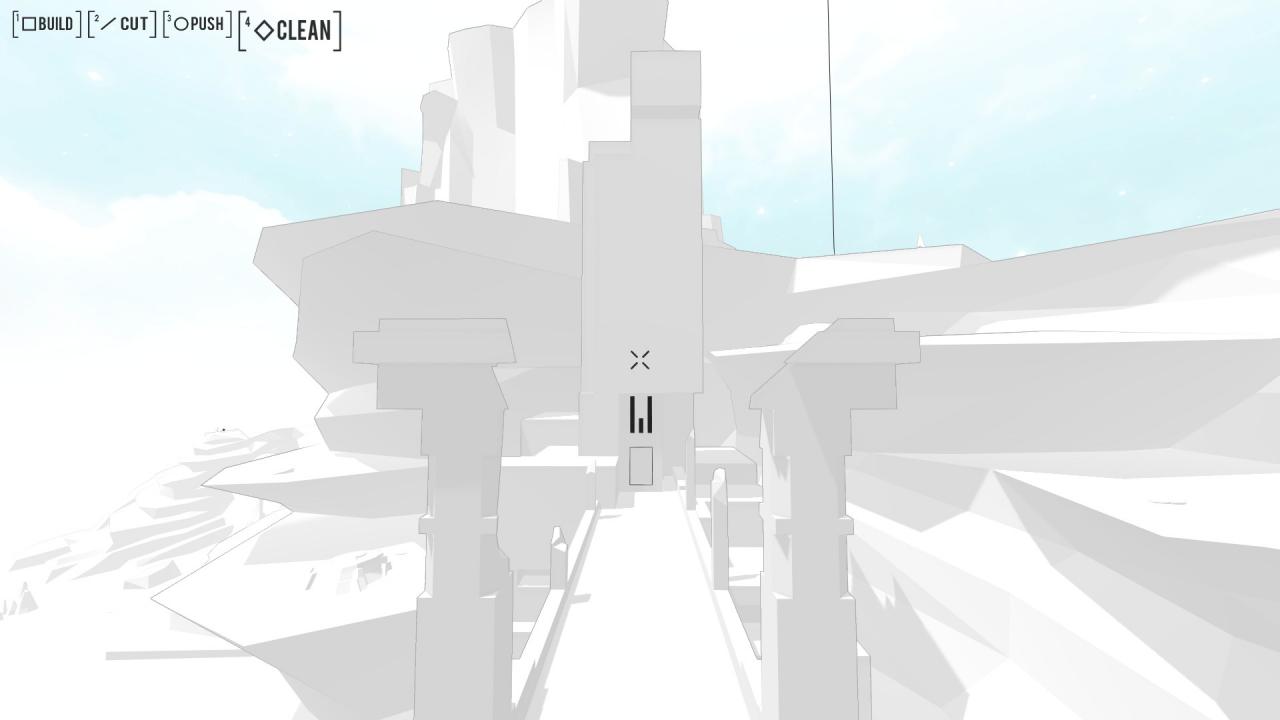 Merge with Dust
Unlock the ability to return to nothingnessAfter activating the four monoliths and gaining the “Heartfelt Reunion” achievement, a new portal will appear on the flying island. To enter you need to collect 40 echoes 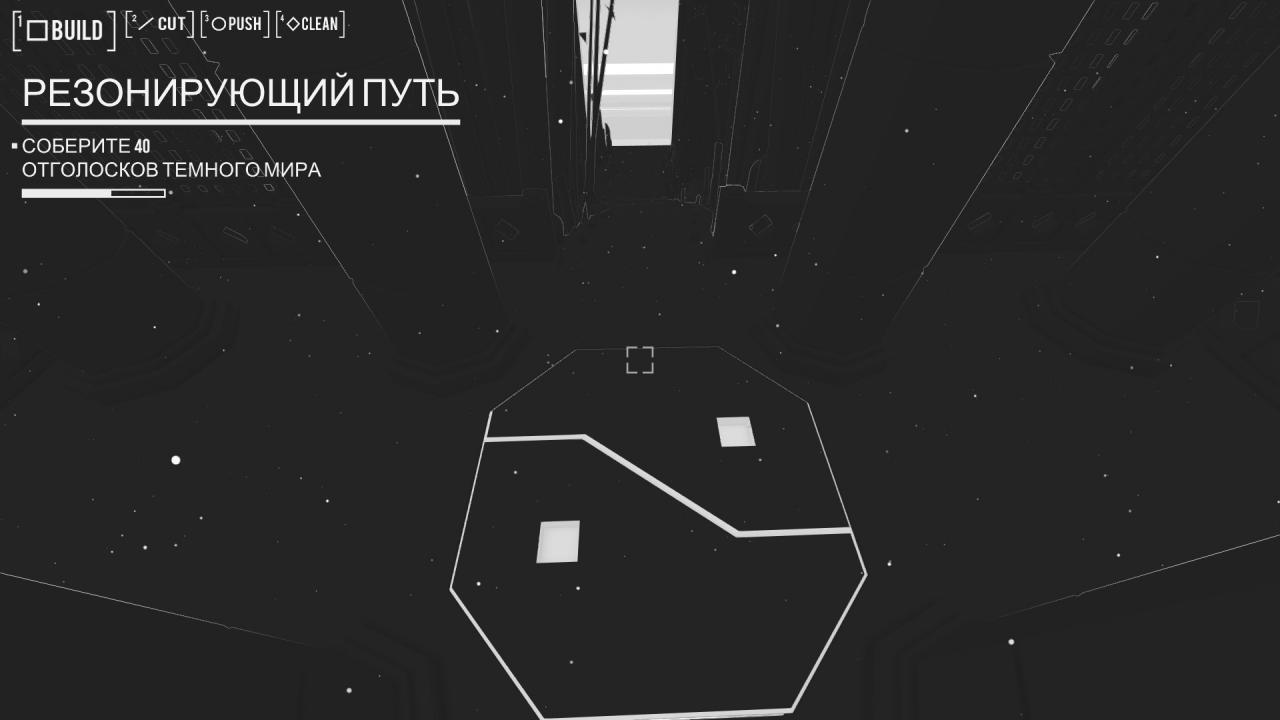 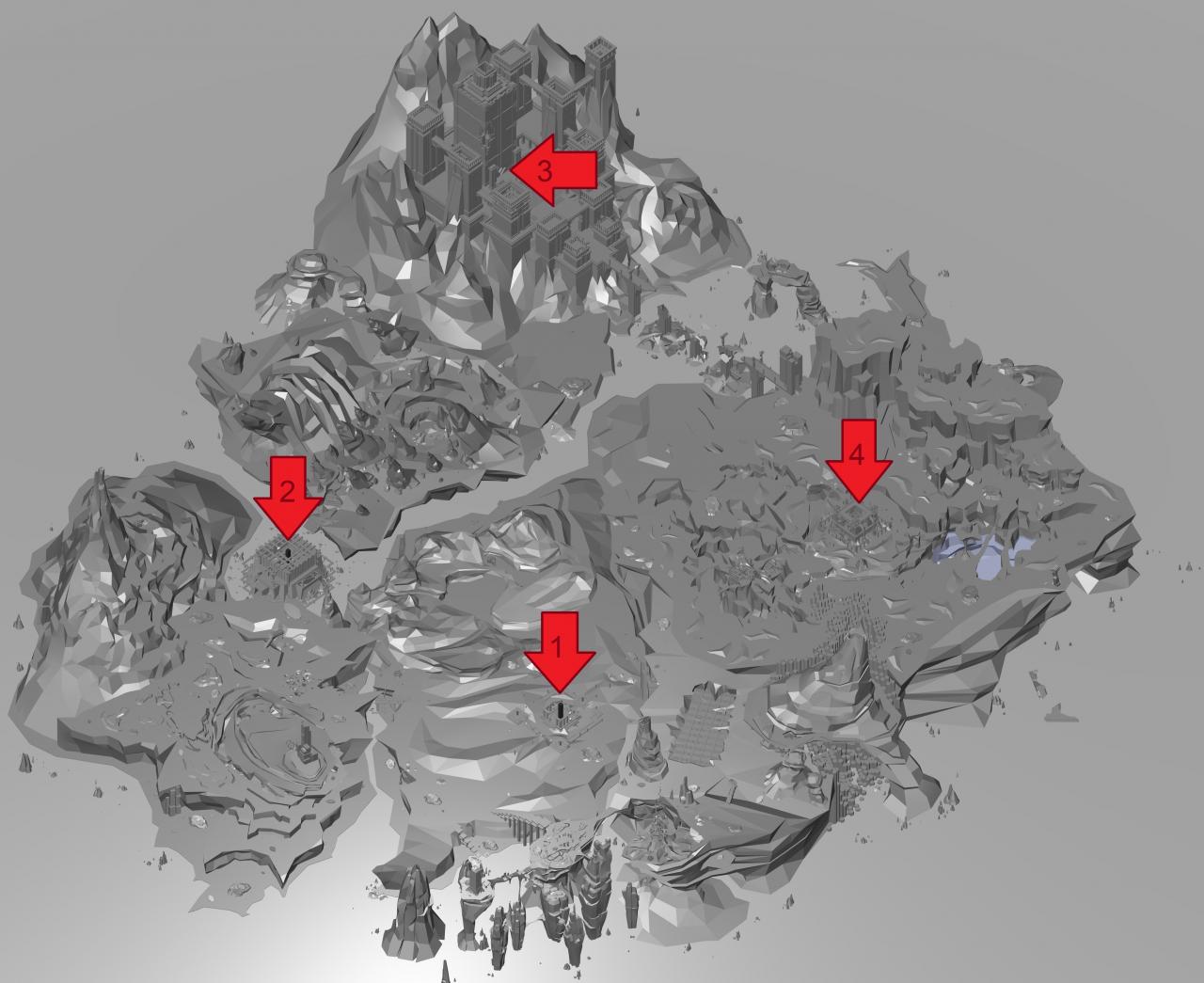 The Gate to All Mystery
Complete the first monolith, allowing the Light planet to reveal itselfThere are three small monoliths around the monolith. It is necessary to insert blocks, cut vines and push parts on small monoliths.

Perception of the Nature of Things
Complete the Temple monolithThere are four trees in the temple, branches must be cut so that they stretch to iridescent blocks. The last block lies on the ground under the blockage

Soft and Weak Overcome Hard and Strong
Complete the Haven monolithThe castle has four floors, on each floor you need to build a figure from the blocks so that it matches the images on the slabs on the sides

Fish Cannot Leave Deep Waters
Complete the Highlands monolithThere are four small monoliths with holes in the cave, you need to fill all the holes with blocks

The Swift Messenger
Restore all the links between Light and Dark in less than 20 minutesAfter activating the first monolith, you have 20 minutes to activate three more monoliths. Time in the tutorial does not count. There is a video with the passage of all monoliths and obtaining achievements (Time is taken into account from 9:30 to 24:30)

Heartfelt Reunion
Reunite Light and Dark, causing Two to be as One once moreAfter activating the four monoliths, you need to climb the flying island, inside there will be a room where you need to fill the notch with blocks. After that, a door will appear at the top, where you also need to put two blocks in the recesses. In this case, it is necessary to collect 25 echoes.
Then you need to insert three blocks into the roots of the tree 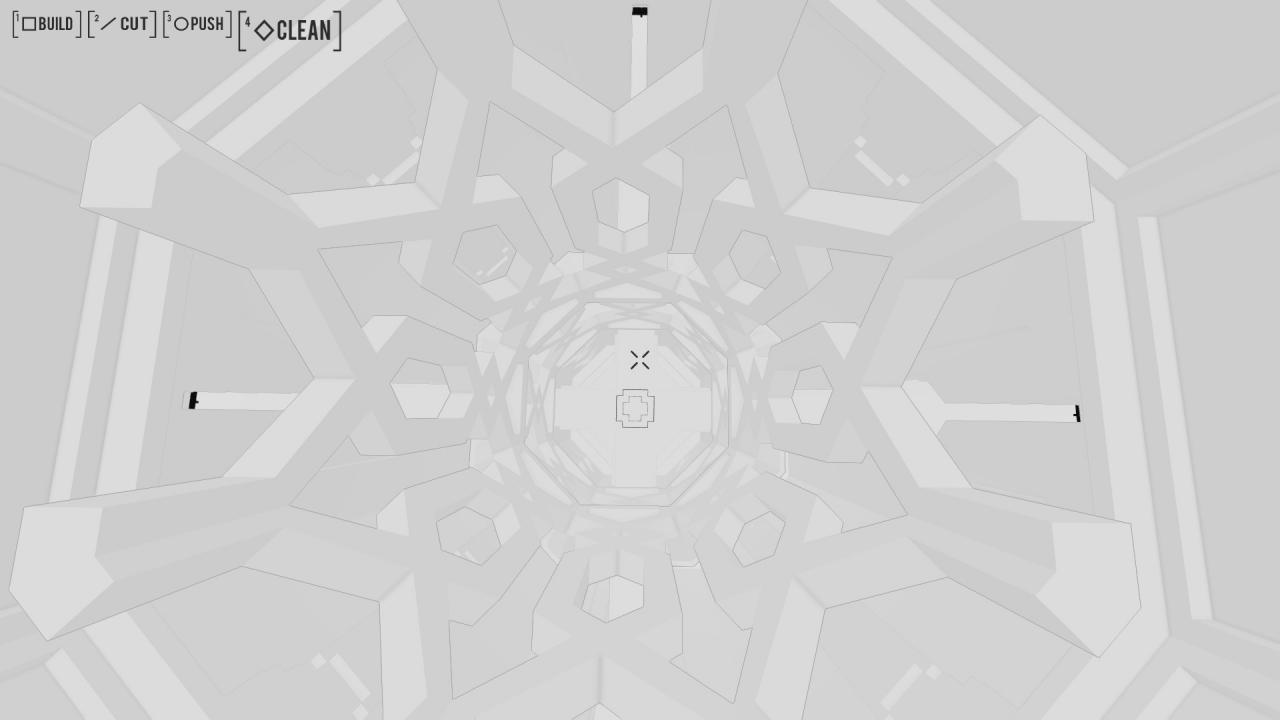 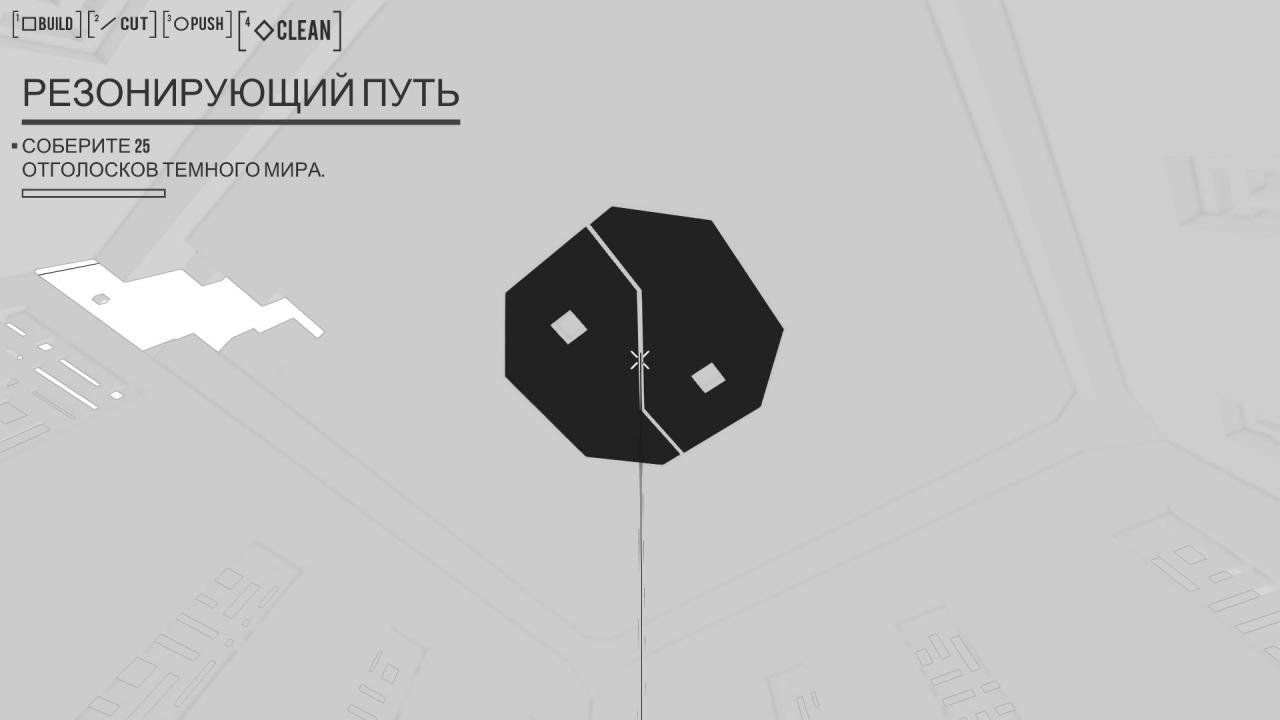 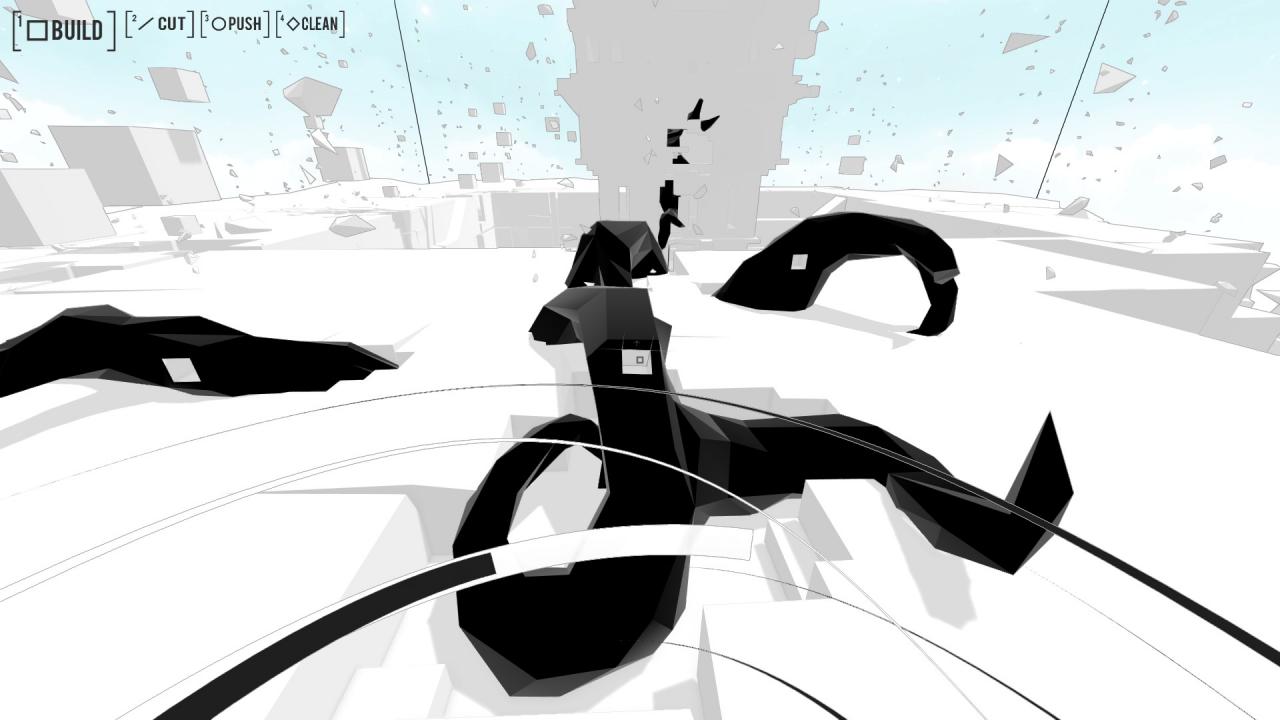 The Great Oneness
Reach the 100% completion markYou need to collect all echoes, open all abilities and activate all monoliths

Words of the Way

The Erudite
Read 10 steles bearing the words of the Way

The Enlightened
Read half the words of the Way

The Sage
Read all the words of the WayFor achievement you must read all the inscriptions on the plates of the path. A list of all the plates can be found in the manual: Link

All achievements in one picture

That’s all we are sharing today in Bokida – Heartfelt Reunion 100% Achievements Guide, if there are anything you want to add please feel free to leave a comment below and we’ll see you soon.